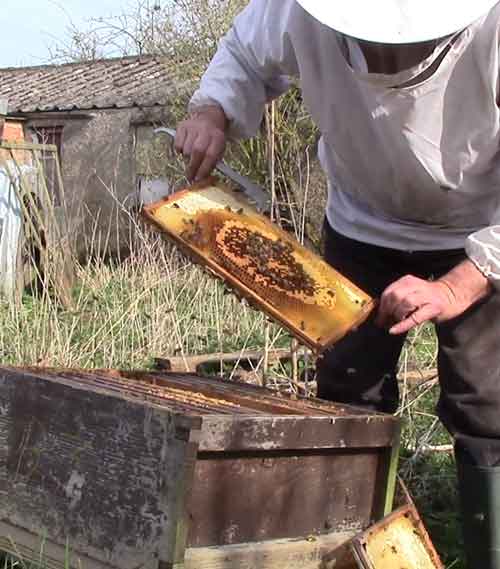 Originally my experiment was to see if a colony could get through the winter without chemical treatment to control the mites. However, on inspection at the start of April I decided to extend the experiment to see just how long I could continue to keep these bees without using any treaments for mites.

3rd April 2016 First inspection - a warm day at last - see-video
The brood was relatively small - two frames - but the donut pattern shows that the queen has been laying for some time and a first batch of young bees are out. The super under the brood box still had some honey in the frames and I have now moved it to the top of the stack. The floor was new in September so I didn't change it this time but I did put a cleaned queen excluder on. I didn't see the queen. There were still several full frames of stores so I removed the fondant from the crown board.

13th April One frame of brood removed and given to hive two.

30th April Quick inspection. Eggs and brood - colony is expanding. No swarm signs as yet. No signs of supersedure.

28th May Two frames of brood removed - to bail out hive three. Hive inspected queen seen - no signs of swarming. (those two frames are in a breeding box with queen cells)

14th June inspection - all OK no signs of swarming - there are lot of drones in the hive as a result of the wired frames put in. They were very busy today.

21st June inspection - all OK. Queen seen - but queen cups now being made. Non with eggs in so far.

8th August Bees really busy one side of the small entrance opened. Eggs and brood in all stages. Five frames of capped honey taken (capping nice white colour) some half filled frames left in the one super left on. 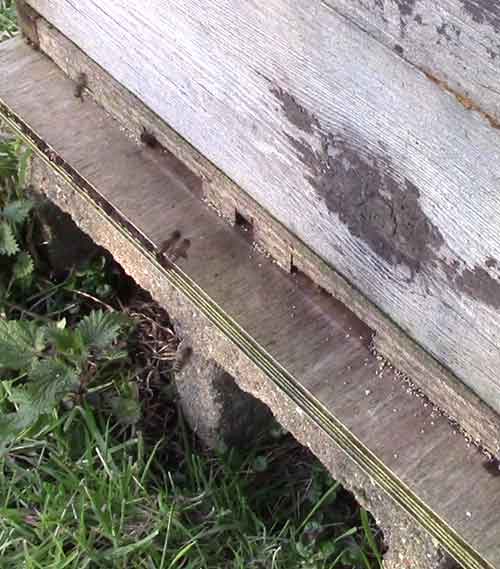